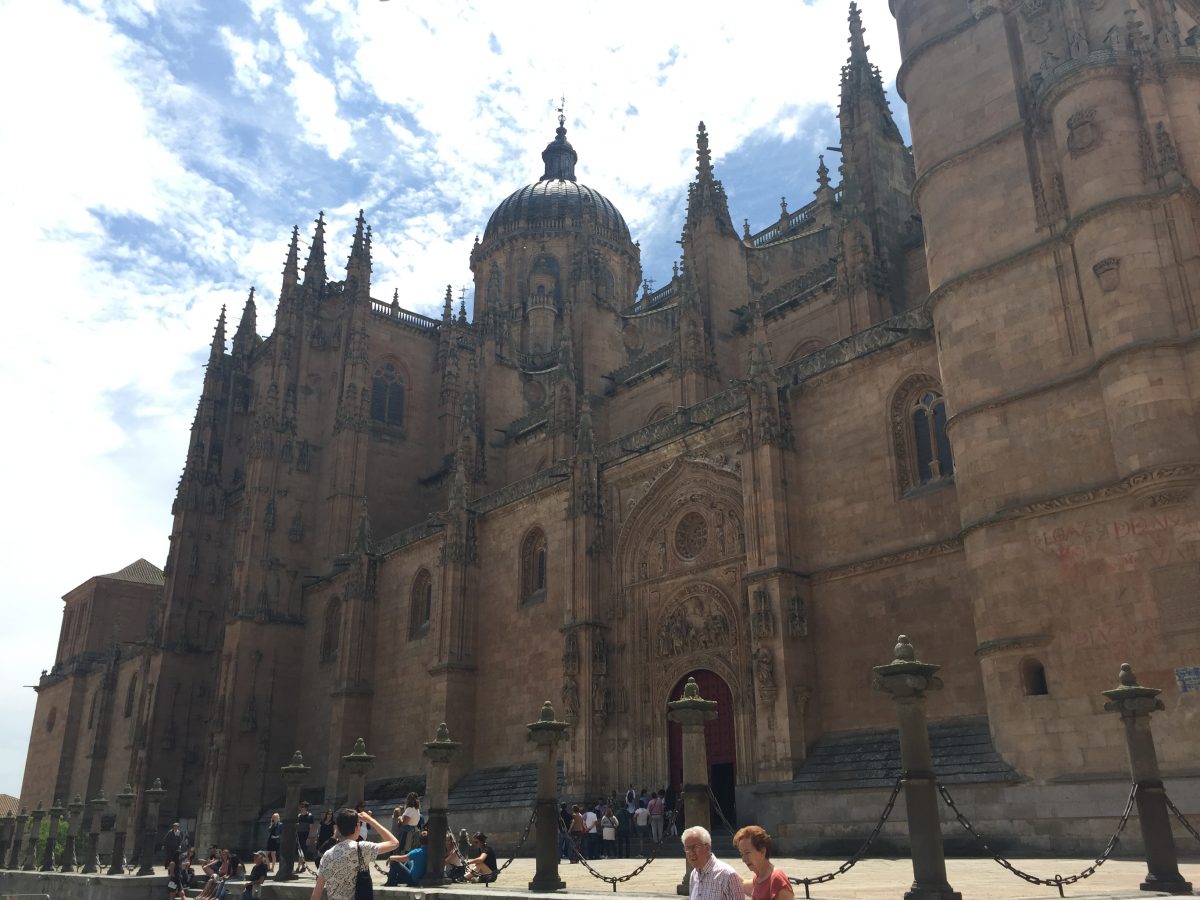 At the beginning of June, the Interns, students and two staff members of the Hamilton Kerr Institute travelled to Madrid for the annual study trip, visiting the cultural highlights of the Spanish capital and some of the major conservation studios. We enjoyed the hospitality and refined culinary traditions of Spain, guided by second year HKI intern Carlos González Juste who lived in Madrid before moving to Cambridge.

The day after we arrived in Madrid, we travelled out of the city to visit Spain’s oldest University Town, Salamanca, a UNESCO World Heritage Site. One of the city’s most remarkable buildings is the House of the Shells, or Casa de las Conchas, a late gothic palace covered with stone carved shells. Hidden away in Salamanca’s back streets is the Museum of Art Nouveau and Art Deco that houses a collection of remarkable glassware, furniture, dolls and paintings by Ignacio Zuloaga.

The Crown of thorns

Our first studio visit took us to the headquarters of the Instituto del Patrimonio Cultural de España (Cultural Heritage of Spain), located on the outskirts of the city. The circular building is one of the most remarkable architectural structures of the 1960’s, and is nicknamed “the Crown of Thorns”. After visiting the entrance hall, library and rooftop terrace we were guided around the sculpture and painting conservation departments, as well as the laboratories. We were introduced to the materials and techniques used in the making of traditional Spanish baroque sculptures, like the laying-in of glass eyes, use of ivory teeth and genuine hair in the representation of saints.

In one of the narrow streets in the centre of Madrid lies the private conservation studio ICONO I&R S.C. We were guided around by co-owner and conservator Rafael Romero Asenjo, specialist on 17th century Spanish still-lives, some of which we admired while touring the studio. At the end of this exciting day, we walked to another hidden gem, the rooftop of the Círculo de Bellas Artes to enjoy a panoramic view of the city.

On our third day we visited the Escuela Superior de Conservación y Restauración De Bienes Culturales, where our colleague Carlos trained as a conservator. We were introduced to the four year BA- and one year Master program and guided around the studios housed in a 17th century palace. In the wall-painting conservation studio , a monumental canvas painting was currently being treated. The numerous bullet holes that perforated the painting were a reminder of the violent civil war that raged through Spain in the 1930’s. Other highlights of our visit included a roman pillar with ancient graffiti, traditional Spanish fans, paintings on glass supports and the challenging support treatments in the panel paintings studio.

In his Majesty’s service

Inside the magnificent Palacio Real de Madrid are located the conservation studios and Royal workshop of the King. We walked through a long corridor with a seemingly infinite amount of doors on either side. Behind every door was housed a different studio: clocks, paper and book, painting, metal…

The first room we entered was the studio responsible for the maintenance and repair of the ca.700 clocks, tower bells, music boxes and organ pieces dispersed over the Royal palaces. The specialist skills required for this work takes many years of practice, and has unfortunately become a dying trade.

In one of the studios, we saw a rare piece of royal transport history, the litter used by the elderly Emperor Charles V. After visiting paper and book conservation as well as frame conservation, we arrived at the studio designated for the treatment of small scale paintings. On the easel stood a delightful Madonna and Child by Quinten Massys which was in the process of having its varnish removed. The conservators often work on location for larger pieces, like the treatment of the monumental Crucifixion by Rogier van der Weyden kept at the Escorial Palace. Just next to the Royal Quarters, right on the first floor of the Palacio Real, a painting conservator was finishing the treatment of several large pieces by the neoclassical painter Anton Raphael Mengs, a favourite of Charles III of Spain.

The surface of Guernica

Spain’s national museum of 20th century art, the Museo Nacional Centro de Arte Reina Sofía, houses a world renowned collection of modern art. The most enigmatic work of its collection is Pablo Picasso’s magnum opus: Guernica. A team of conservators and computer technicians have recently completed an imaging project, scanning the monumental canvas in high resolution. This makes the monitoring and studying of the painting’s fragile surface much easier for conservators and art historians. The team of 22 conservators are mainly involved in the loan requests the museum receives, preparing paintings for transport and assessing their condition. Most treatments are limited to stabilising the artwork and minimal intervention, as modern and contemporary artworks present challenges the conservation world has not fully mastered yet.

The Museo Nacional del Prado is a true garden of delights for the art lover, where the walls are adorned with works by Titian, Van der Weyden, Rubens, Velázquez and Goya. The conservation studios have recently been moved to the museums new extension, the former monastery of San Jerónimo el Real. We were shown some of the panel support systems that were developed by the Panel Painting Initiative, a project that was conducted with the help of the Getty Conservation Institute. After discussing some of the treatments, we moved to the museum’s laboratory. The imaging facilities and analytical techniques employed by the scientists are tailored to answer specific questions asked by curators and conservators. In recent years, the laboratory has conducted ground-breaking work on the analysis of historic materials used in Spanish paintings, especially the composition of ground layers.

*For security reasons, no photos were allowed to be taken during the tour*

Following the studio visit, we went to see the blockbuster exhibition on Hieronymus Bosch, better known in Spain as El Bosco, and an exhibition on the French baroque artist Georges de La Tour.

The ghost of El Greco

On Friday we took the train to the nearby city of Toledo, a medieval stronghold which history goes back to Roman times. The astonishing buildings and structures across the city are a reminder of Toledo’s complex cultural and religious history. The Cathedral of Saint Mary of Toledo houses many 15th century altarpieces and the recently restored Disrobing by El Greco. The artist lived in Toledo for most of his life and many of his paintings have been preserved in Toledo’s churches and monasteries. In the Santo Domingo el Antiguo, the local nun pointed out a hole in the floor, where the artist is supposedly buried. Before we travelled back to Madrid we acquired a few bags of the famous Toledo marzipan, in the hope to make it last until we were back to England.

Our study trip to Madrid, on top of being sunny and full of delicious food, was an absolute delight as there were so many beautiful artworks and buildings to enjoy. The Bosch exhibition was everyone’s favourite, and we would like to encourage people to kill two birds with one stone by going to see it when you visit Madrid, as many of the paintings belonging to the Prado, such as the Earthy Delights, will never travel in order to preserve the condition of these masterpieces.

Recently Sven published an article on the technique of Antwerp flower painters for the catalogue of the exhibition Power Flower: Foral still lifes in the Netherlands at the Antwerp Rockoxhuis Museum. At the moment the results of his research project on the flower painter Daniel Seghers are on display in the Fitzwilliam Museum Cambridge, and will be published in the upcoming Hamilton kerr Bulletin 2016. The author has previously contributed articles to Openbaar Kunstbezit Vlaanderen (OKV), CeROArt and the BRK/APROA –bulletin.