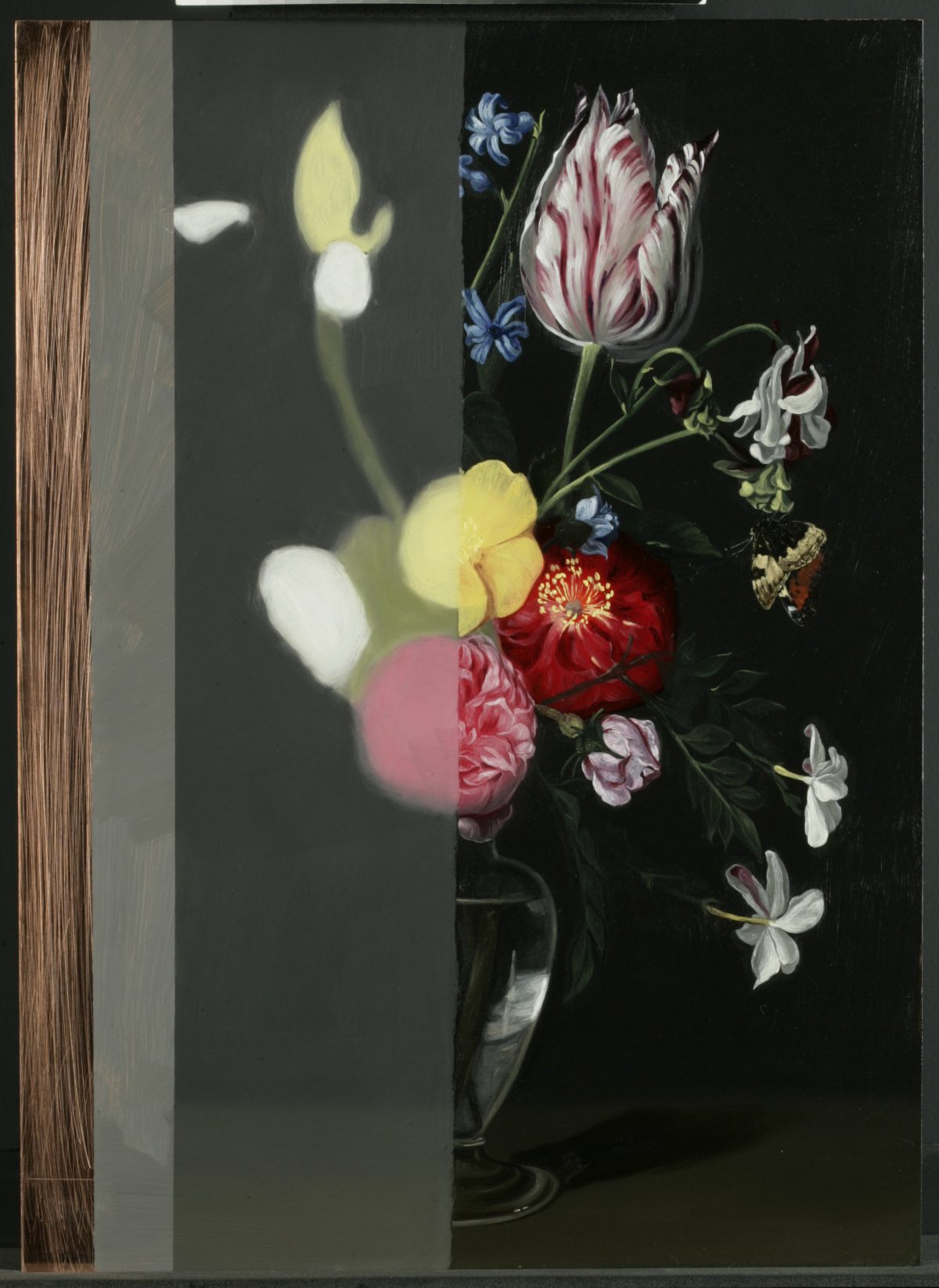 In 2014, I started a research project at the Hamilton Kerr Institute, studying the painting technique of the seventeenth century flower painter Daniël Seghers (Antwerp 1590-1661).[1] One of the master’s flower pieces kept at the Fitzwilliam Museum was studied in depth using modern imaging techniques and paint analysis. These findings were used to paint a reconstruction of the painting, emulating the original materials and techniques as faithfully as possible. When painting the reconstruction, the ageing that has affected the paint and varnish on the original painting was disregarded. The result of this step-by-step reconstruction shows how the painting was created and how it would have looked when it left the artist’s studio. The reconstruction will be on show at the Fitzwilliam Museum in June as part of the Hamilton Kerr Institute’s 40th anniversary display.

The Vase of Flowers, kept at the Fitzwilliam Museum, is a beautiful example of Seghers’ colourful flower arrangements. When the painting was examined, an unfinished flower piece was discovered on the reverse of the copper support. This is possibly the only surviving flower painting of the period that is left in the dead-colouring stage, it is therefore an invaluable source for the study of the genre. The dead-colouring is the first step of the painting process, when the artist defines the composition. These abstract looking shapes are also present underneath the finished flower piece, and can be seen with the naked eye to a certain extent, or more clearly with the use of infrared imaging techniques.

The range of pigments Seghers employed fall firmly into the mainstream of painting practices in the Low Countries during the seventeenth century.[2] The artist’s pallet contains natural earth pigments, manufactured colours like lead white, and a few precious pigments like ultramarine blue, made from the semi-precious stone lapis lazuli. In preparation for painting the reconstruction, a range of historic pigments were ground in oil; the dry pigment powder was placed on a glass slab and the required amount of drying oil was added. This was mixed into a paste and ground with a glass muller to form a homogeneous paint. The consistency of the paint could be altered by adding some chalk or boiled linseed oil. The paint was kept in glass containers and used throughout the whole process of painting.

Like the Fitzwilliam painting, the reconstruction is executed on a thin copper panel. The smooth surface of the copper support allows fine detailing, characteristic of seventeenth century Flemish and Dutch flower pieces. Following historic practices, the surface of the copper plate was roughened and rubbed with garlic thus achieving better adhesion between the smooth support and the paint layers. The support was covered with a ‘ground’ or preparatory surface; the grey colour was applied quite thickly, with brushstrokes running in different directions. The preparatory layer consists of a mixture of lead white, charcoal black, raw umber and some chalk.

After the ground layer had dried the most important flowers were positioned using coloured plains, this stage is called dead-colouring. IR images of the Vase of Flowers made it possible to look through the paintlayers and see the shapes the artist laid in during the dead-colouring stage. The unfinished composition on the reverse of the painting helped to interpreting the IR images. First the flowers were positioned in bright colours; pink, red, white and yellow. Then a thin green scumble was applied in the centre and finally the dark background and tabletop were painted in. Whilst the paint was still wet, the edges of the different elements were blended in with a brush to create soft transitions. The paint mixtures are not complex, the reds consists mainly of red lead and vermillion, whilst the yellow is made up of lead-tin-yellow and some lead white. The pink colour was achieved by mixing lead white, madder (red lake) and a small amount of red lead.

Seghers only needed a single paintlayer on top of the dead-colouring to model his flowers. The large flowers were painted on top of the bright underlayer, while the small flowers were painted directly on top of the dark background. The bright underlayer plays a key role in the final result. The vibrant colour of the red rose, for example, was achieved by applying a semi-transparant red lake on top of the red dead-colouring. The egg shape underneath the tulip is still visible in the final result, it is placed on the lighter side of the flower, whilst the shadow side was painted on top of the dark background. This way it was possible to create astonishing pictorial effects in a limited amount of time. Because the painting was executed in only one layer, on top of the dead-colouring, the brushwork and paint handling had to be executed with great care. The brushstrokes follow the shape of the flowers, giving a feeling of three dimensions. This aspect of the painting was especially difficult to imitate during the reconstruction because the consistency of the paint had to be adjusted to improve the paint handling.

In the last stage the artist added the insects to his flower arrangement. The confidence with which the butterflies were executed is astonishing. Some of the details on the wings were achieved by scratching into the wet paint, uncovering the dark colour of the background. I could only achieve a similar level of detail by using loups. Once the paint had dried a varnish was applied on top of the painting to saturate the colours.

Reflecting on the effects of ageing

Comparing the original with the reconstruction makes it clear we look at Old Master paintings through a window of distorted glass, often without being aware of it.[3] The layers of fragile material that make up a work of art are all subject to change and decay. By painting this reconstruction I want to show how this work would have looked when it left the artist’s studio almost 400 years ago.

Recently Sven published an article on the technique of Antwerp flower painters for the catalogue of the exhibition Power Flower: Foral still lifes in the Netherlands at the Antwerp Rockoxhuis Museum. The author has previously contributed articles to Openbaar Kunstbezit Vlaanderen (OKV), CeROArt and the BRK/APROA –bulletin.

[2] The artists’ palette and materials were studied using several analytical techniques. Chemical elements were identified using X-ray Fluorescence spectroscopy (XRF) and Ma-XRF scanning to indicate the presence of certain (mainly inorganic) pigments. The layer structure of the paint was studied using cross section analysis. Small paint samples reveal the sequence of paint layers and made it possible to see the individual pigment-particles that make up the various strata. The cross sections were analysed with scanning electron microscopy with energy-dispersive X-ray spectroscopy (SEM-EDX) to enable more detailed identification of individual pigment particles in the paint mixture.

[3] For more information on the ageing of paintings consult Paul Taylor’s Condition: The Ageing of Art , 2015.