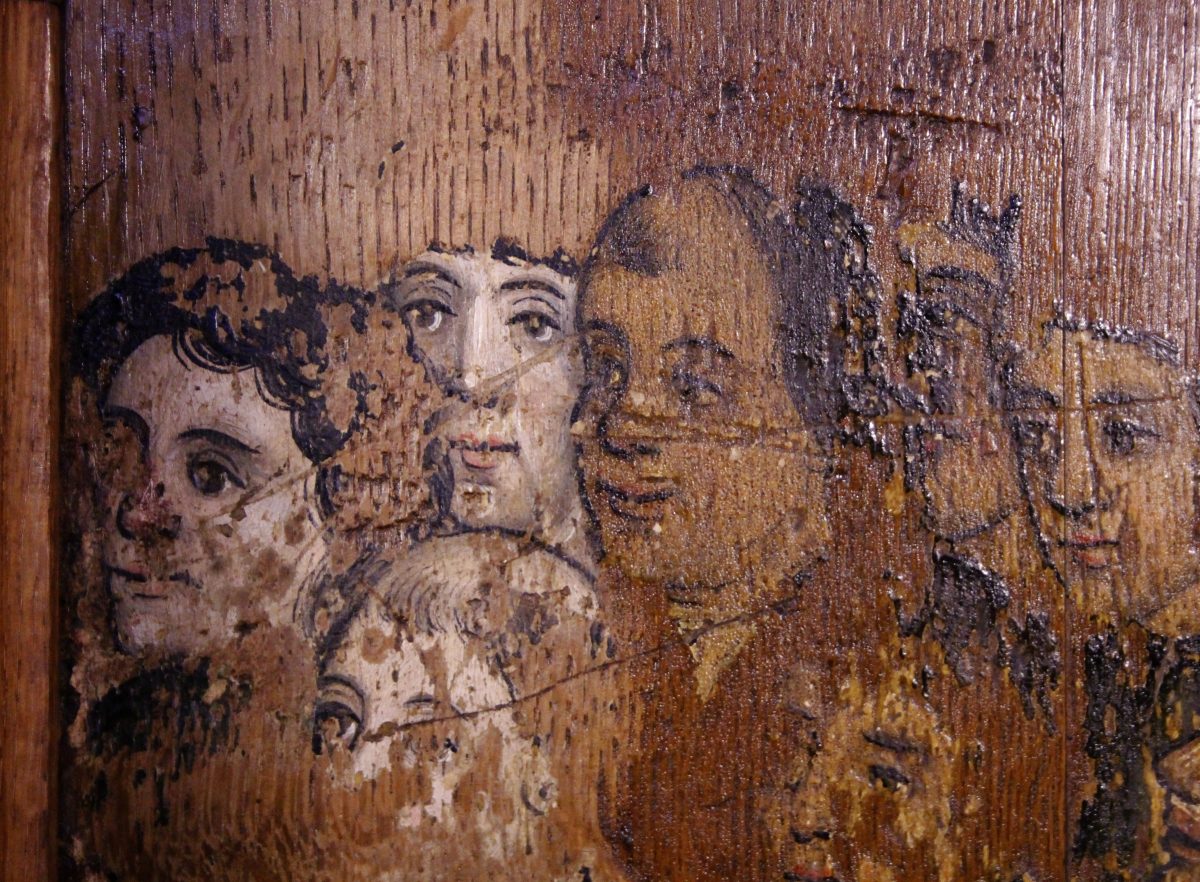 Six panels forming part of a rood screen housed in the medieval church of St Matthew’s in Ipswich, Suffolk, were the subject of a week-long in-situ in September 2016 by Christine Braybrook and Sarah Bayliss.

Medieval rood and parclose screens are decorative partitions that separate the chancel from the nave in a church, and were usually decorated with painted panels depicting saints or donors. Few of these screens survived the destruction and damage from iconoclasm during the Reformation and Civil War in England, but in East Anglia there are a significant number of them left which allows meaningful study and comparison of their construction and painting. This research was the focus of Dr Lucy Wrapson’s PhD thesis, Patterns of production: a technical art historical study of East Anglia’s late medieval screens (2013, University of Cambridge). The in-situ project was a direct result of this body of work as it was noted upon examination that the St Matthew’s rood screen was in need of consolidation in order to stabilise flaking and vulnerable paint.

Like many medieval churches, St Matthew’s has had several phases of building and re-building. The south arcade (where the rood screen is present) is late 14th century, the chancel, north arcade and west tower 15th century and the aisles and part of the tower 19th century. This medieval building continues to function as a modern day church and was warm with excellent tea making facilities – so top marks from the conservators, St Matthew’s!

The six painted panels of the St Matthew’s rood screen depict four bishop saints and one male and one female group of donors (fig. 3). The panels have suffered a lot of damage during their history including significant iconoclasm to the faces of the bishops, accidental damage and ‘refitting’ to more modern tastes. The six panels are all that remains of the original rood screen as they have been set into a 19th-century screen, and it is probable that it was during this intervention that the colourful backgrounds were scrapped down to the plain wood. However, it is possible to see the shape of the original upper and lower dado tracery from the ghost shapes of the gilding on the paintings (fig. 4). A comparison of these tracery shapes with other parclose and rood screens (notably at Southwold and Woodbridge) ascribes a date range of c.1448-70 for the St Matthew panels.

Unfortunately, the four bishop saints have few iconographical features to allow them to be easily identified. It has previously been suggested by A. Baker that the first and fourth saint in the sequence are St Thomas Becket and St Erasmus respectively. This is based on the vehemence with which the first panel has been defaced (literally and metaphorically), as St Thomas Becket was a particularly hated figure during the Reformation (fig. 13), and the windlass held by the fourth saint is the attribute of St Erasmus. As the panels have been removed from their original structure and context, it is unknown whether the panels would always have been set out in this sequence.

Condition and Treatment of the Rood Screen

Upon examination, it was clear that some of the paintings had vulnerable raised and tenting paint, which could easily be knocked off and lost forever. They were also obscured by surface dirt and an old and very discoloured brown varnish, which had the effect of camouflaging the figures against the wooden backgrounds and dimming the original gold and bright pigments.

The first stage was to consolidate and secure the flaking paint, an important step in helping these rare paintings to survive as it limits further paint loss from these already damaged paintings (fig. 5). The paintings were then surface cleaned using Blitzfix™ sponges soaked in deionised water, pH adjusted with ammonia to pH 8-9 (fig. 6). While a lot of dirt was removed from the surface of the paintings, there was little aesthetic improvement.

Next, tests were undertaken to remove the dark and disfiguring varnish. Rood screens often have multiple layers of aged resin and/or oil varnishes, making varnish removal on-site extremely challenging, away from the comforts of a fully equipped conservation studio. However, in this case a small miracle occurred and the varnish was readily soluble using free solvents, revealing the beautifully preserved original paint film and gilding (fig. 7-9). After much rejoicing, we begun what turned into one of the most satisfying cleans I’ve ever done. The thick, brown varnish was removed, revealing the figures in all their remaining glory. The change was stunning as the gold regained its lustre and the pure colours of the robes were revealed. But what I enjoyed the most was seeing the faces again, no longer a dull shadow of the wood, but standing out against the background with their black drawn features and pale skin.

The varnish removal also allowed us to see more clearly aspects of the panels’ making. In some areas the underdrawing, which had previously been only visible in the IRR photographs of the paintings, became apparent through the paint and gilding. We were also able to find remnants of the coloured backgrounds (fig. 11). It was previously thought that, like many paintings of this time, the backgrounds would have been alternating red and green, but in actual fact all of the backgrounds were green. It also became evident that the robes of the bishop saints had been gilded completely and the decoration painted on top of the gold, rather than the artist/s leaving a reserve to reduce the amount of gold used (fig. 12).

Once cleaned, the paintings were brush varnished with Paraloid B72, a stable, synthetic varnish which will not discolour anywhere near as much, nor as quickly as the previously applied natural varnish!

This project was immensely satisfying and it was also wonderful to hear the surprise of members of the church at how changed their paintings looked. It was also a very pleasing change for us, as in-situ work tends to be more concerned with stabilising paintings and frames rather than transforming them. So to leave behind the rood screen glimmering gently, rather than lost in the shadows, was certainly an excellent end to the week.

Ms Sarah Bayliss is a graduate of the Post-graduate Diploma in the Conservation of Easel Paintings at The Courtauld Institute in London. She also has a Master of Chemistry from the University of East Anglia in Norwich, UK.