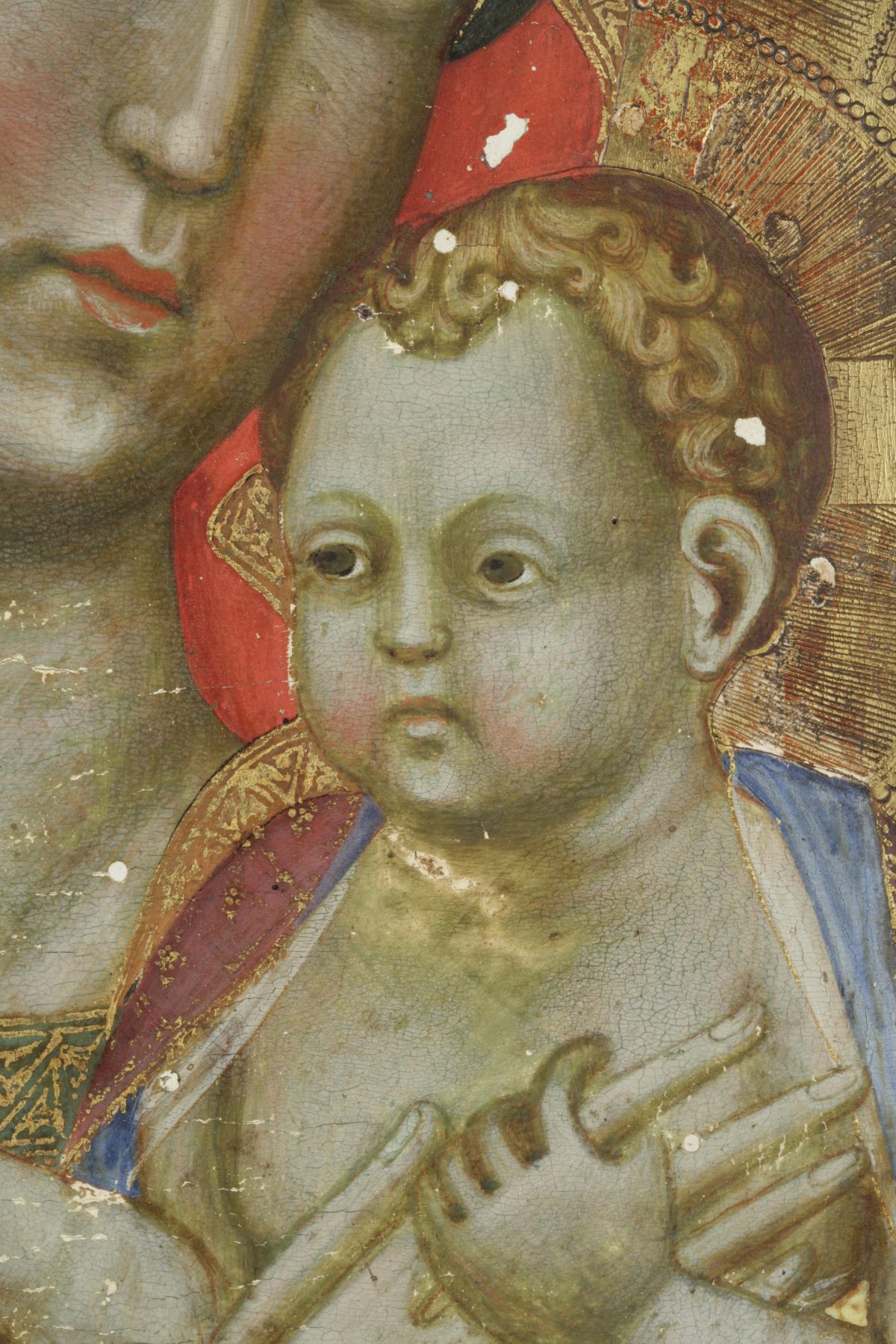 This 14th century Madonna and Child belongs to the Fitzwilliam Museum and is attributed to Pietro da Orvieto (1430-84). The painting came to the Hamilton Kerr Institute conservation studio in preparation for the Museum’s exhibition Madonnas and Miracles, which runs until 4th June 2017.

Condition of the Painting

While the painting was structurally sound, disfiguring and discoloured old retouchings were widespread across the paint surface, most prominent in the necks of the Virgin and Christ. The gilded frame and gilded background also presented a considerable amount of wear and abrasion, revealing the red bole and, in places, the underlying white gesso ground. When looking at the dark blue/black mantle of the Virgin in raking light, it was evident that considerable damage had occurred to this paint passage. The natural resin varnish layer had discoloured and the painting presented a dull greyish tone as the result of surface dirt accumulation and possibly the remains of a glair layer (an egg white varnish). During the treatment of this small painting interesting discoveries were made, such as the beautifully painted reverse, which we will share in this article.

How is the painting made?

This painting has been reconstructed by Anna Don, first year student at the Hamilton Kerr Institute. Her comprehensive step-by-step description includes many impressive photos, offering details that you might otherwise not see.

The support and frame

The painting is on a wooden panel (wood not identified) and is likely to be have been painted using egg tempera and oil glazes, mixed with dry pigments. The reverse of the painting was also painted using egg tempera, but with the exclusion of oil. The background of the painting is gilded, as are some of the details used for the Madonna’s robes. Its integral gilded frame is still present, attached to the front of the panel using nails, as can be seen in the X-radiograph image below. This is a rare find as frames of this type are often discarded having suffered too much damage over time through handling.

A white ground layer, probably of animal glue and gesso (untested) was applied to the back and front of the painting, as well as the frame. The infrared reflectography (IRR) image (see below) revealed the presence of underdrawing in certain areas of the composition, executed in a liquid medium using a brush. Around the figures, it is possible to make out incised lines etched into the gesso to indicate the areas that were to be gilded. The background and haloes are water-gilded in a conventional fashion and display a highly burnished appearance, whilst the decoration of the draperies was done using a mordant gilding technique. The haloes of the two figures were incised with fine circular lines with the use of a compass, while the decorations were made using punch tools.

The flesh tones are distinctively Italian in terms of their build-up. The initial modelling was done using a green underpaint layer, known as verdaccio, which is traditionally made using a green earth pigment, as can be seen in the image of the Child below. This was followed by the application of the flesh tones. This layer was applied in fine, repetitive hatched brushstrokes, which is a common feature associated with the use of egg tempera.

A sample from the Virgin’s dark blue robe shows a build-up of two paint layers consisting of a greenish blue under layer with a darker, more intense blue upper layer, consisting of coarser pigment particles of azurite.

The painting’s biggest secret was revealed when the reverse was cleaned to uncover a colourful and decorative marble or porphyry imitation scheme, which is framed in a trompe-l’oeil stone moulding. This is a decorative motif commonly found in small scale, early Italian panel painting, but has been observed on a work by Albrecht Dürer. The painting on the reverse was completely obscured by the thick layer of dirt. To facilitate the painting of the straight lines that make up the grey borders, the artist incised the lines in the ground layer. The bright and fantastic colours of the reverse of this small devotional panel can once again be seen and admired.

It was decided to apply a protective and re-saturating varnish layer only to the painted areas on the front of the painting, but not to the gilded background, the gilded frame or to the reverse of the painting. This approach is in keeping with early Italian painting practice where the gilded areas, especially the water gilding, would have been left unvarnished. However, the painted areas on the front required a varnish layer in order to re-gain their saturation, whilst also providing an isolating layer between the original paint and the subsequent retouching. 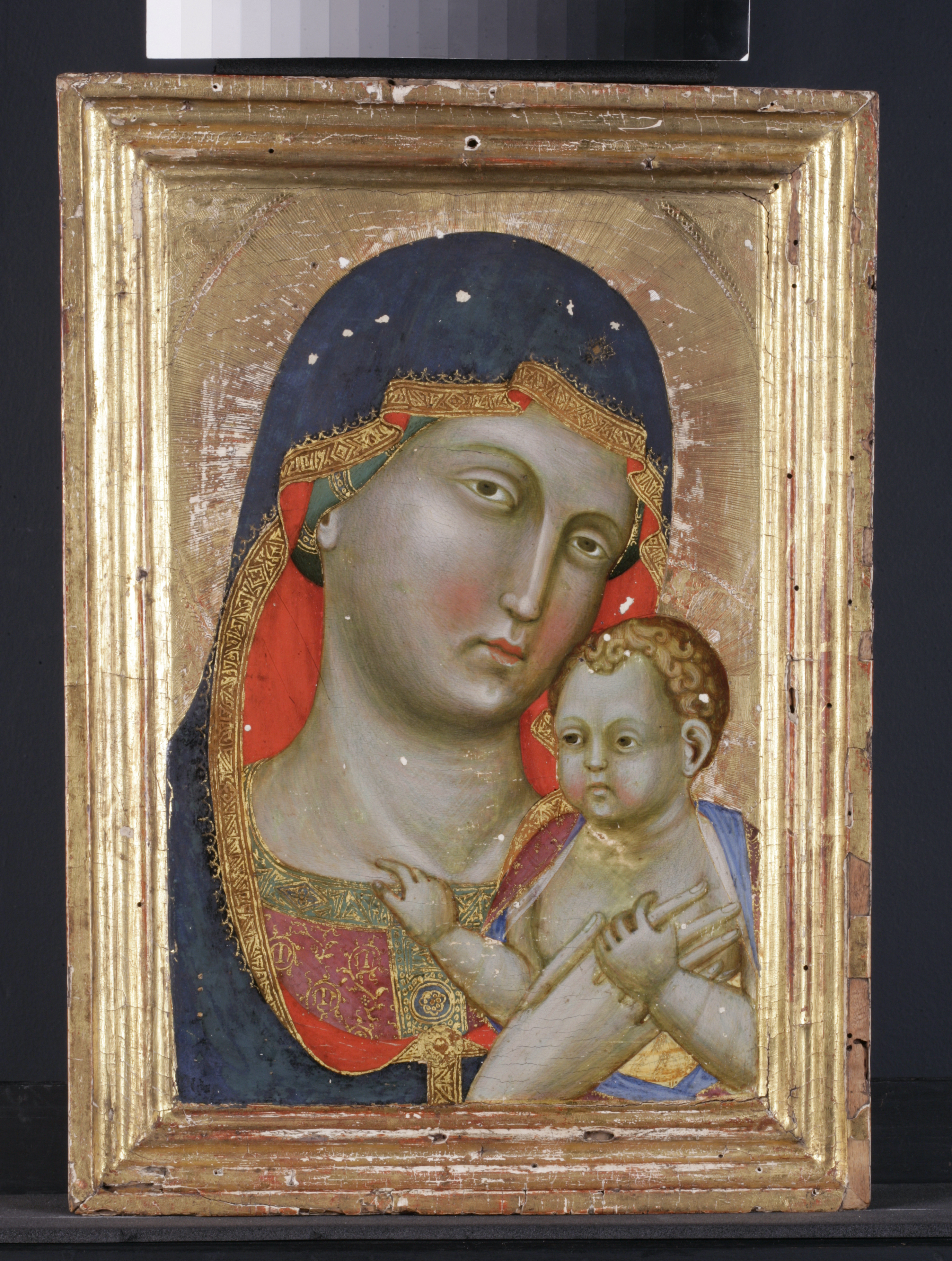 The losses in the painted areas were toned with watercolour and glazed with Gamblin Conservation Colours. In the gilded areas, the losses were toned in a red colour, slightly lighter than the colour of the original bole.

About the author:
Sven Van Dorst graduated magna cum laude at the Artesis University College Antwerp (Belgium) in 2012, majoring in paintings conservation and restoration. The following two years, he worked on several projects at the Royal Museum of Fine Arts Antwerp and as a freelance conservator and painter. Sven completed a two-year postgraduate internship at the Hamilton Kerr Institute in 2016 and is currently working at The Phoebus Foundation (Belgium) as a conservator and researcher. Recently, he published essays on the technique of Antwerp flower painters in the Hamilton Kerr Bulletin and the Power Flower exhibition catalogue (Rockoxhuis Museum) as well as a piece on the 20th century Belgian artist Gustave van de Woestyne (catalogue: “Rooted, Painting Flanders”). In 2018, Sven will commence the treatment and research of the Dymphna altarpiece by Goswijn van der Weyden.
To contact Sven: sven.vandorst@phoebusfoundation.org