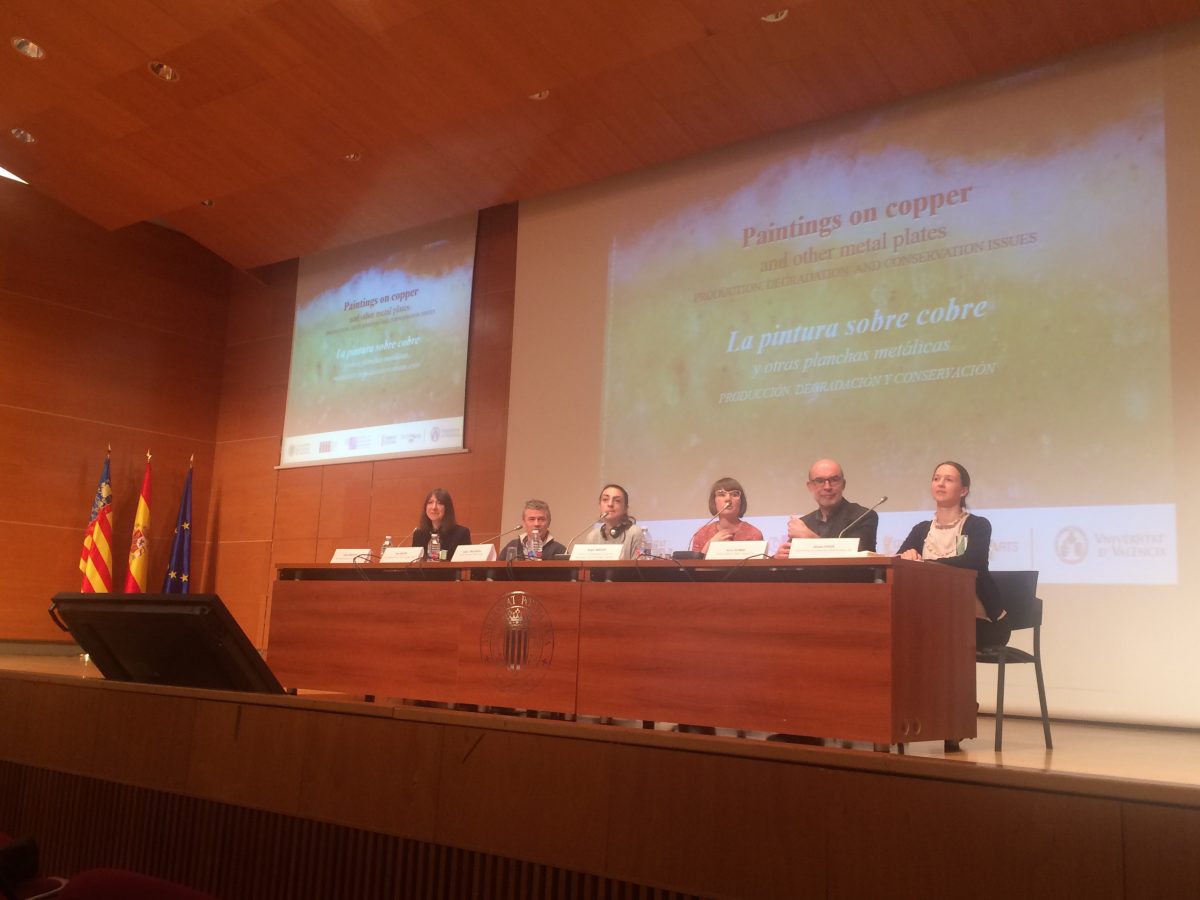 The conference ‘Paintings on copper and other metal plates: Production, Degradation and Conservation Issues’ was held at the Polytechnic University of Valencia from the 27 to the 28 January 2017. The two-day conference provided a unique opportunity to explore and discuss the material history of metal-based supports, as well as their unique conservation issues.

The keynote speaker for the conference was Isabel Horovitz (The Painting Conservation Studio, London), a longstanding expert on the history and conservation of copper supports. Her talk provided an overview of the use of metal supports by artists in Europe. The practice commenced with the experimental adoption of copper plates in sixteenth century Italy, and continued even during the nineteenth and twentieth centuries, as seen in the work of artists such as William Blake, Angelica Kauffman and Lucian Freud. In discussing the history of copper supports, Ms. Horovitz also addressed the manufacture and preparation of copper plates for painting, including the hammering of the metal itself, as well as artists’ application of ground layers.

The artist’s process of making in relation to paintings on copper was further elucidated by Alison Stock (City & Guilds of London Art School, London), who gave a talk about her reconstruction of Hendrick van Balen’s Adoration of the Shepherds (Fitzwilliam Museum, Cambridge). The talk discussed the preparation of the copper support based on instructions derived from historic treatises. Through a thorough technical examination of van Balen’s painting, Ms. Stock aimed to create a replica with a similar material structure to the original work.

Jørgen Wadum (CATS, Copenhagen) also delivered a talk that delved into the raw materiality of paintings on copper, with focus on the trade of copper and paintings on copper within the Antwerp market during the seventeenth century. Interestingly, Spain became a major destination for the export of paintings on copper, from whence they continued their journey to the Spanish colonies in South America. Although it was not speculated by Wadum, one cannot help but relate the popularity of these Antwerpian copper-based artworks to the comments made by Horovitz regarding the early appreciation of copper plates as a durable support for paintings. Indeed, when found in good condition, paintings on copper seem to have an almost ageless surface, as if it has “just left the artist’s studio”.

The materiality of copper paintings was also explored by Anne Schmid (Fondation Beyeler, Basel), who discussed the interesting case of ‘silvered’ copper plates. The examination of copper supports has revealed this rare variation, whereby a silver-coloured metallic layer was applied to the surface intended for painting. Analysis of these layers has shown that these ‘silvered’ layers often consist of tin or tin-lead alloy. Through her research, Schmid was able to provide a number of hypotheses regarding the purpose of these metallic coatings, with the most compelling conclusion being that the practice derived from the crockery industry in Rome where similar coatings were applied to prevent the green degradation products associated with copper objects.

Additional talks were also given by Nico Broers (École Supérieure des Arts Saint-Luc, Liège), Lydia-Chara Pavlopoulou (freelance conservator, Athens) and Laura Fuster López (Polytechnic University, Valencia). All three speakers focused on the physical and chemical characteristics of the copper support, as well as its interaction with overlying oil paint films. Both Broers and Pavlopoulou addressed the formation of copper carboxylates at the interface between the copper plate and ground layer. Such layers have been identified on a number of oil paintings on copper, which has led to the hypothesis that the formation of copper soaps contributes to the delamination issues often associated with these supports.

The final talk was given by Professor Leslie Carlyle (Universidade NOVA de Lisboa) during the second day of the conference. In her talk, Prof. Carlyle presented the results of two MA theses undertaken at the University of Lisbon. The first thesis was conducted by Maria Leonor Oliveira, focusing on the consolidation of oil paintings on copper. The basis for Oliveira’s research was an undated unsigned oil painting entitled ‘The Visitation’, which exhibited severe flaking.

In order to identify the most appropriate consolidant for her treatment, Oliveira tested several well-known synthetic resins (Paraloid B72, Mowilith 20, BEVA 371b and Laropal A81), chosen for their exclusion of water-based components. The adhesion of the polymers to copper surfaces was tested through coating small pieces of copper with the various resins, as well as attaching paint flakes to a copper surface. Based on the results of these tests, both BEVA 371b and Laropal A81 were excluded as possible consolidants due to their undesirable physical properties upon drying (BEVA 371b formed a very thick, soft coating, whilst Laropal A81 formed a very thin and brittle film). Out of the remaining polymers tested, Paraloid B72 was preferred over Mowilith 20, as it formed a film with greater hardness and tenacity.

The second thesis discussed in Carlyle’s talk was the work of Daniel Vega, whose research centered on the development of an infill formula suitable for oil paintings on copper. Due to the corrosive action of water on copper, traditional aqueous fill materials are often considered unsuitable for filling on copper supports. For the same reason, beeswax-containing fillers such as Gamblin® Pigmented Wax-Resin sticks should also be avoided, as the fatty acid component of the filling material facilitates the production of copper carboxylates and thereby promotes further corrosion.

Vega explored the physical properties of various microcrystalline and synthetic resin mixtures in order to produce a filling material that had the desired characteristics in terms of both handling and reversibility. The results of the research showed that formulations made with Techniwax 9426 and Regalrez 1094 or 1126 had the desired qualities. Both components have an acid value of zero and are therefore likely to be chemically stable in relation to a copper support. In addition, both materials are readily available to conservation professionals and practitioners can easily replicate the recipes outlined by Vega. The research summaries presented by Prof. Carlyle provided clear and practical information, which will no doubt be of use to conservators dealing with the treatment of oil paintings on copper in the future.

In addition to the talks presented, the audience was also given short overviews of the posters on display at the conference. The posters presented a range of topics including the technical investigation of a number of artworks on copper, as well as specific conservation concerns. Sally Higgs (Courtauld Institute of Art, London) presented her technical examination of a portrait of cardinal Antoine Perrenot de Granvelle by Scipione Pulzone (Courtauld Gallery). Ms. Higgs evaluation of Pulzone’s portrait mirrored the observations made by Horovitz in her keynote speech; namely that the choice of copper as a support was a conscious choice made by the artist in order to create a durable, everlasting image.

Overall, the two-day conference provided a dynamic forum where the unexplored issues of metal supports could be discussed and future research questions could be posed. Our knowledge of the production, use and degradation patterns of paintings on copper has come a long way since the ‘Copper as Canvas’ exhibition was held at Phoenix Art Museum in 1998. However, perhaps the clearest outcome of the La Pintura Sobre Cobre conference was the need for further investigation into the physical and chemical characteristics, as well as potential conservation methods for this relatively under-studied, yet fascinating artists’ material.

Emma Jansson graduated from the Courtauld Institute of Art in 2016, having completed the three-year Postgraduate Diploma in the Conservation of Easel Paintings. She also holds a BA in History of Art/Archaeology and Japanese Studies from the School of Oriental and African Studies, University of London. Emma has experience working in both private conservation studios in London and public institutions. Her most recent placements include internships at the Victoria & Albert Museum and the National Maritime Museum in Greenwich, as well as an in situ project at the Houses of Parliament, Westminster Palace. She is also involved in the technical analysis of artworks. Her final-year thesis at the Courtauld Institute focused on the materials and technique of the Impressionist artist Alfred Sisley. Emma is continuing her interest in technical art history at the HKI, where she is involved in several research projects, including a study on the uptake of artificial ultramarine by British artists in the nineteenth century.