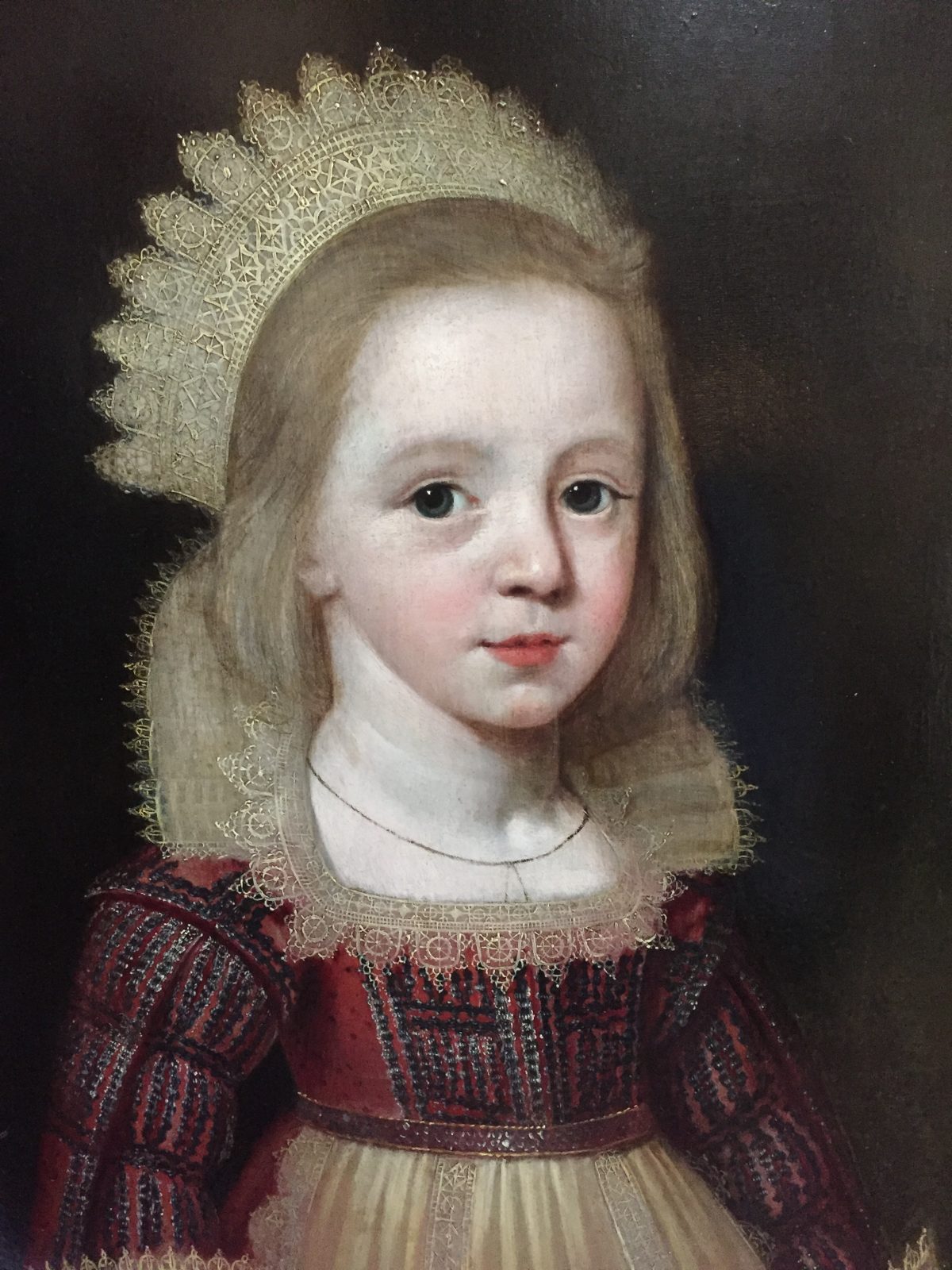 On April 27th 2016, Carlos Gonzalez Juste (2nd year post-grad intern), Mary Kempski (supervisor and senior conservator) and myself travelled to Deene Park, between Corby and Stamford (Northamptonshire), to take care of 12 paintings that have suffered from mould and record their profiles in order to monitor changes to their panel support curvatures.

Deene House is a sixteenth century property incorporating a medieval manor and has been occupied by the Brudenell family since 1514 up until this day. The house has a grand style, with many paintings of ancestors as well as family heirlooms. As this house is lived in and not a museum, no photos of its interior will be published, only details of the paintings and the work done on them.

The twelve paintings are family portraits dating back from the seventeenth century. They are painted on oak panels by a British artist/studio and represent children and women at various ages. It is not known who they are but it seems likely they were members of the Brudenell family.

The paintings had suffered from humidity and had developed mould on the reverse of the panels. Not all panels were affected: some of them had been restored in 1966, and the reverse had been impregnated with a mixture of wax and resin, which acted as a barrier. The restored panels were thus protected from mould. However, this wax mixture also acted as moisture barrier, and these panels were less affected by the recent lowering of relative humidity in the house, which caused the more sensitive panels to warp and adopt a more pronounced curvature.

This in-situ had three objectives: remove the mould, take the curvature of the panels for monitoring and future comparison, and reframe the paintings to a conservation standard.

The paintings were first taken off the walls. All 12 could not be taken off at once since the space was restricted, which meant we could only work on 4 to 5 paintings at the same. As soon as one was done, it was put back on the wall and another one was brought in.

The mould was first removed using swabs and alcohol (click on photos to enlarge).

This enabled us to then unframe the paintings. A few of them had been restored by the Hamilton Kerr Institute several years before and already had proper framing. The rest were improperly framed, with nails holding the panels in their frames which were restricting their movements and could cause internal stresses. Luckily, no splits had developed or joints opened.

Once the paintings were out of their frames, the curvature profiles were taken on a piece of cardboard, and the current relative humidity and temperature of the room were written down. This will allow us to compare the curvatures at our next visit and understand the sensitivity of the wood to environmental conditions. Charlotte Brudenell (wife of the present owner of Deene Park)  is very committed to giving the paintings the best possible conditions in their setting and is hoping to improve the climate control for the panels and all the paintings in the house.

The frames that had not been recently restored had their rebates lined with acid-free paper and cork spacers to accommodate the panels. Once the paintings were laid down in their frames, they were kept in place with brass strips at the middle of the top and bottom edges, so as to enable the panels to still move across the grain according to the relative humidity fluctuations.  The paintings were then hung back on the wall.

This in-situ was a very good learning experience, as treating 12 paintings in a day was a great challenge, even with three people. It is interesting to see how one improves as the day wears on and how organisation evolves in order to be as economical as possible. Doing repetitive tasks, such as lining rebates and framing, greatly improves one’s skills and efficiency. The size of the artworks, as well as their location in the rooms and proximity to furniture, also required constant teamwork in order to move and re-hang them safely. The Hamilton Kerr Institute will soon return to Deene Park to continue the monitoring and preventive conservation of its artefacts.

Ms Camille Polkownik graduated with a Master Degree in the Conservation and Restoration of Paintings in 2014, from the École nationale supérieure des arts visuels de La Cambre in Brussels . She also has a Bachelor degree in the Conservation and Restoration of Painted Works (2011) from the Superior School of Fine Arts, in Avignon, France. She has interned in the Royal Institute for Culture Heritage (KIK-IRPA, Belgium), the Museum of Fine Arts in Nice (France), in private studios and at the Art Gallery of New South Wales (Sydney, Australia). 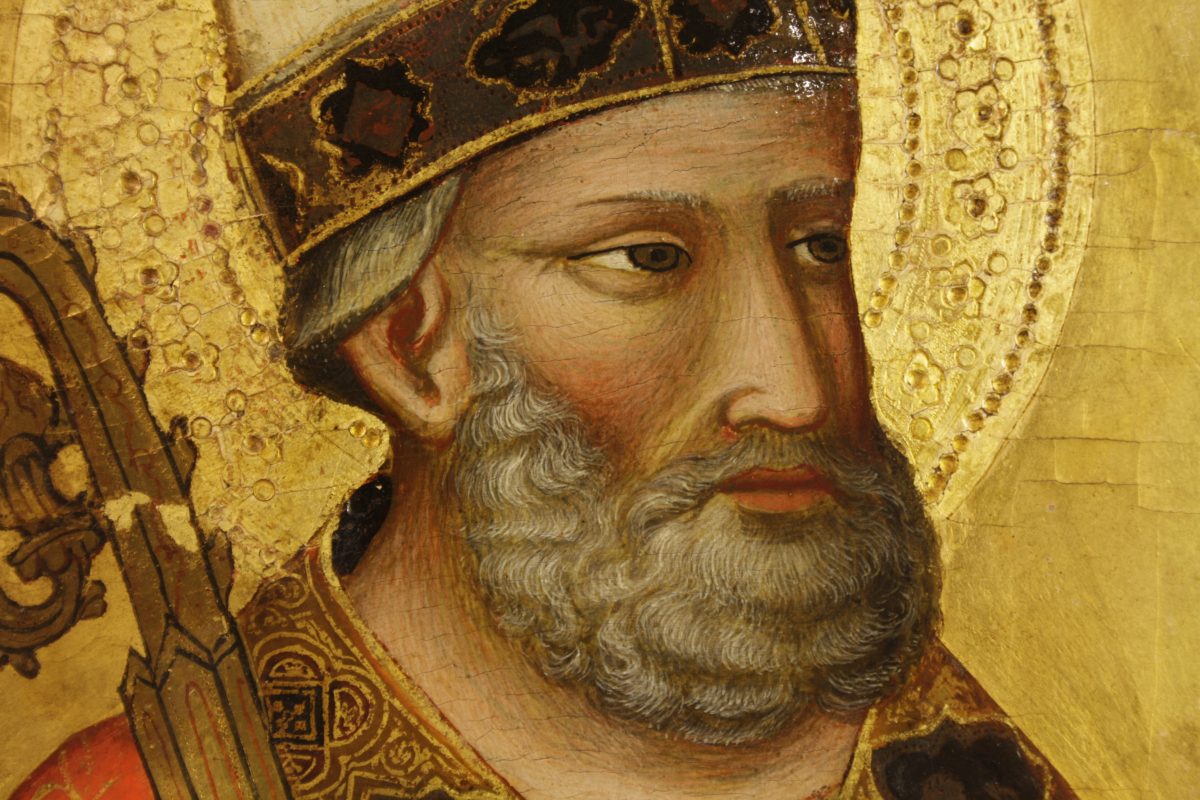 From the 6th to the 8th of April 2016, Senior Painting Conservator Christine Slottved Kimbriel and I (Carlos González Juste, 2nd year postgraduate Intern) worked in-situ treating an altarpiece in a parish church in the south of England. The altarpiece is an Italian tryptich dated to the second half of the 14th century, and currently attributed to Pietro Nelli, a Sienese artist working in the tradition of Giotto.

Like with many art objects not kept in a museum environment, this altarpiece has to face typical church conditions, including changes in temperature and relative humidity, the occasional birds droppings, and also the effects of the presence of bats which frequent the building.

Frequent and uncontrolled changes in relative humidity have an adverse effect on panel paintings, as wooden supports tends to respond with expansion and contraction. These movements affect not only the panel (- which may split if it does not have space to move in the frame) but also the paint layers and gilding, producing cracks, flaking and subsequently paint loss.

Bats are common in churches and their roots are protected by legislation. The damage produced by the corrosion of their urine and guano can be considerable, especially on the painted surface where it damages both the varnish and the paint.

The in-situ work on the altarpiece started with a full visual examination of the three panels, their structure and frame. In spite of its overall sound state of preservation, the altarpiece required consolidation of loose and vulnerable areas of paint and gilding, both on the panels and on the 19th century gilt frame. After consolidation with Lascaux© Medium for Consolidation, surface dirt and several bird droppings were removed, some areas of deteriorated varnish saturated with new varnish application and losses filled and toned. The project required us to work from a scaffolding in order to reach all areas of the panels. The surface cleaning removed a considerable build-up of surface dirt and produced a significant improvement to the general appearance of the painting, allowing the astonishingly well-preserved bright colours of the robes and the delicate flesh tones of the faces to come across once again.

Some minor technical investigation was undertaken, and in spite of the challenging conditions of working in-situ and under a time constraint, close optical examination and local infrared photography was accomplished, providing some interesting results.

It is quite common that members of the Institute have to travel to work in-situ in churches, country houses or local museums. The reasons for choosing to work on site, rather than bringing the work to the studio, vary. It may be the right option when the painting is particularly heavy or large, or when its absence is considered unacceptable, as may be the case for an altarpiece that plays a vital part in daily worship. A painting can also be in a particularly delicate state of preservation that necessitates work being undertaken prior to moving the object, or conversely, one or more paintings are in need of only minor, preventive or aesthetic intervention that can be done more cost-effectively on site.

In-situ jobs are always very interesting and useful opportunities for interns, as they give us the opportunity to visit and discover different parts of the country, and especially their works of art. It also helps interns to develop their abilities when they have to face treatments in challenging circumstances and under time pressure, far away from the well-equipped studio. In-situ jobs not only provide the gratification of a job well done, but it also sometimes includes the privilege of seeing how conservation work can have positive repercussions on the daily life of the surrounding community, as was the case here. Having the opportunity to work on a magnificent altarpiece in a beautiful location was truly a pleasure, not least thanks to the helpfulness and interest of the church community, who were eager to see this beautiful work of art to which they feel attached preserved and safe for the foreseeable future.

Carlos González Juste has a B.A. in History from the Complutense University in Madrid and a Degree in Conservation and Restoration of Cultural Heritage from the Escuela Superior de Conservación y Restauración de Bienes Culturales in Madrid.  He has interned in the Museo Nacional del Prado (Madrid) and other Spanish institutions. He is currently completing his second year as a postgraduate Intern at the Hamilton Kerr Institute, University of Cambridge, where he has been working on a wide range of projects, from early Italian paintings, such as the Master of the Castello Nativity, to early C20th Russian artist A. Harlamoff, besides paintings by J. Reynolds, W. van Mieris and the C17th English painter R. Buckett.