How LEDs are now very much earning their keep

The best type of gallery lighting should be versatile, easy to calibrate, natural in appearance and ideally, environmentally compliant.

In recent years the advances in Light Emitting Diodes (LEDs)1 have been little short of extraordinary. This is now an established lighting technology and is ‘absolutely where the future lies’, no ifs, no buts.

Here at the Fitzwilliam Museum most of the lighting, along with many other heritage institutions and art galleries, is predominantly by halogen incandescent2 and to a lesser extent, fluorescent lamps. Although well-honed and now quite sophisticated, there are downfalls: significant energy usage, local heat production and certain reliability issues. Furthermore, when compared to LEDs, incandescent lamps have a pitiful lifespan and to compound matters, the sourcing of suitable parts has become increasingly difficult. 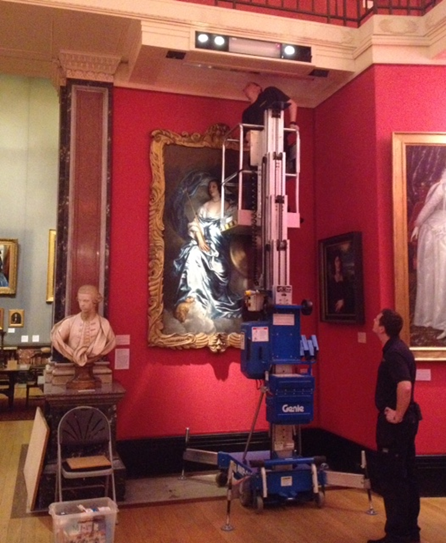 Replacing bulbs can be time consuming, disruptive, and in certain situations it is not always easy to undertake without an element of risk.

The average life expectancy of a traditional incandescent bulb will be around 5 years whereas by way of comparison, an LED will be closer to 100. These statistics alone reveal a startling disparity, and one that increasingly just cannot be ignored.

Recent advances in LEDs have seen a broader range of lenses available and perhaps of more significance, a greater accuracy with regard their colour rendition. So, when the cumulative power saving projections alone are taken into consideration, the argument against their implementation falls pretty much at the first hurdle.

When selecting the type of LED for gallery use, four important factors should be considered carefully The colour rendition index, colour temperature, wavelength profile and light output or illuminance.

The effect of a light source on colour appearance is expressed by the CRI index, on a scale of 0-100.  Natural outdoor light has a CRI of 100 and is used by way of standard comparison.

CRI 90 – excellent, a full and vibrant colour range (heritage organisations should be aiming for 90 plus).

The colour temperature of a lamp can be used to understand how the light will appear to the human eye. Measured in degrees Kelvin (K).

Both natural and emitted electrical light (various types) will be composed of different wavelengths. Light, from whatever the source, will have a unique profile and in turn a ‘specific colour temperature’.

Daylight at noon is generally cited as being around 5,600 K. However, in reality this figure will vary according to both the time of day and weather.

Ultra-violet3 (UV) light waves fall below 400 nm and is invisible to the human eye. The lower the wavelength, the higher the frequency and potentially, more damaging to museum collections. UV should be excluded wherever possible.

By contrast, Infrared4 radiation is above around 750 nm at the higher end of the scale and will produce heat. Heat speeds up chemical reactions and this becomes relevant when caring for collections with regard the rates of decay and degradation. 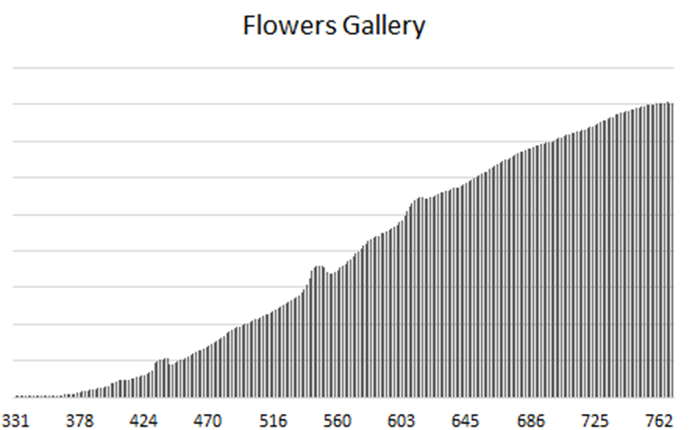 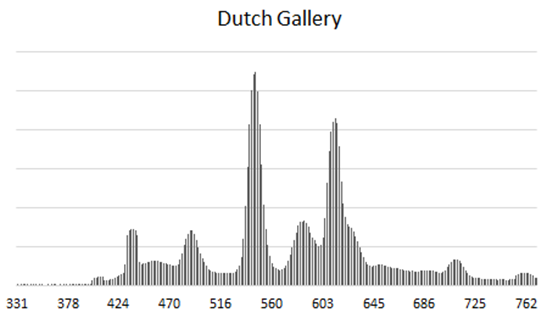 The illuminance considered appropriate for most gallery spaces will be dictated by both addressing audience need and the various sensitivities of the collections displayed (the material type, make-up and overall condition). 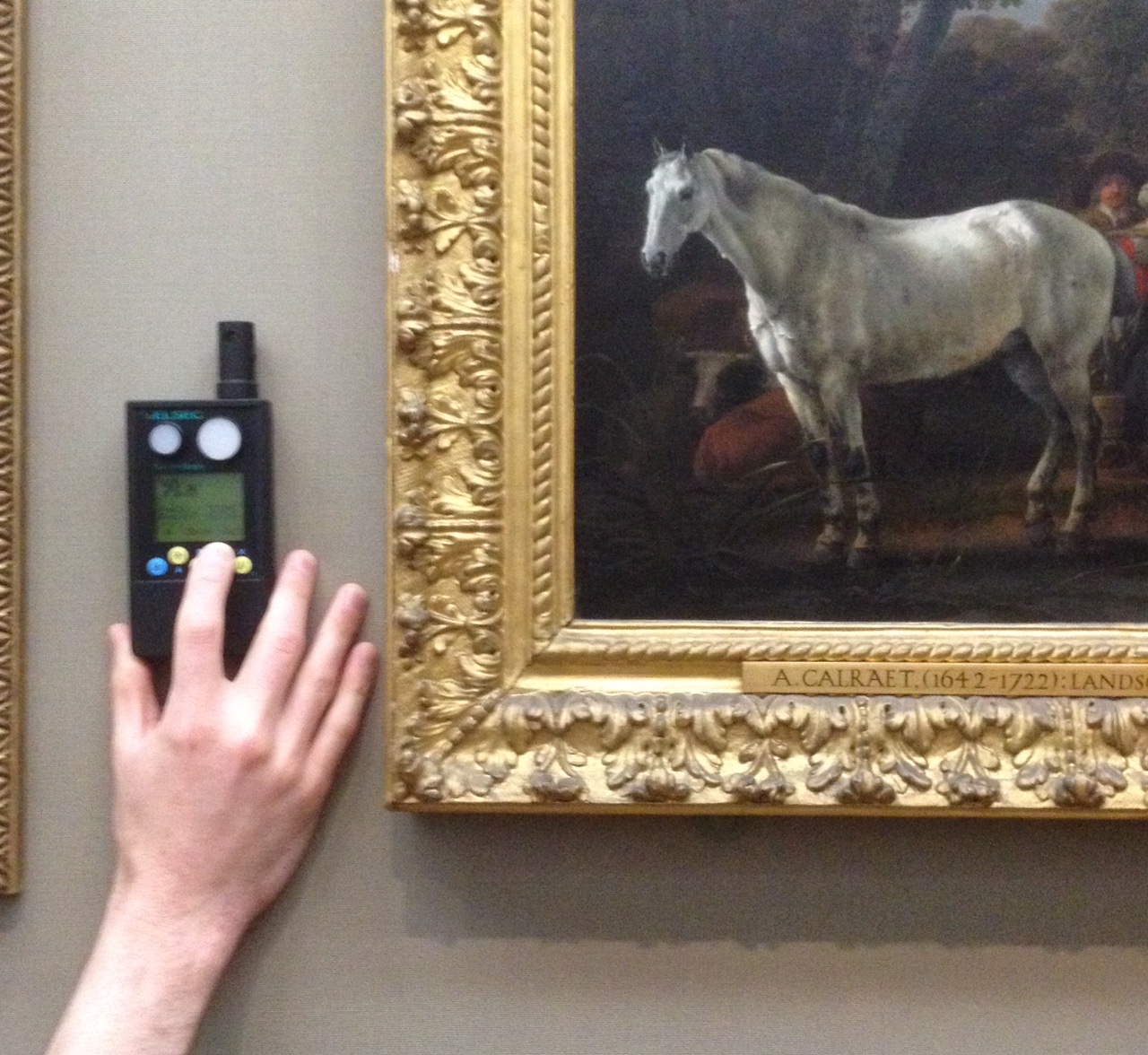 Light levels and exposure should be carefully monitored and ideally logged, since light damage to museum objects is often subtle; the effects are cumulative and crucially, any change inflicted is irreversible.

By way of an example see the drawing below where the cut away top mount shows just how drastic the change can be. 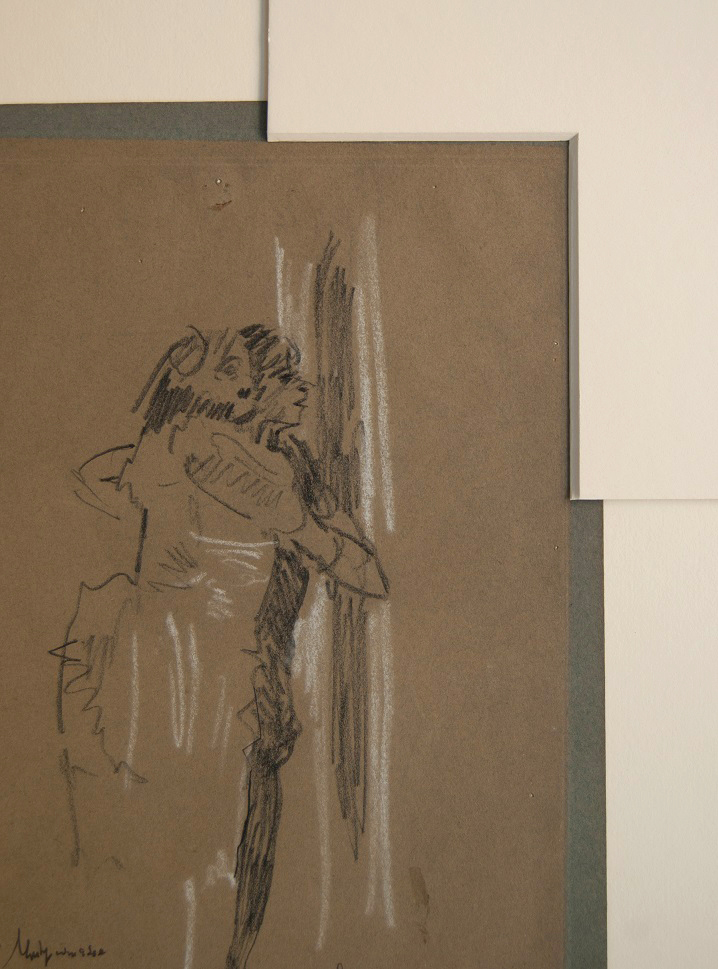 Black and white chalk drawing on a coloured paper by Walter Sickert, 1860-1942 (detail).

In this particular case, the coloured paper support was originally and entirely, a greenish blue. The colour shift from green to brown, where the drawing has been exposed to light, alters both the look and quite possibly, the intended context. Fortunately, such extreme examples are rare within museums and as conservators, we always endeavour to keep it this way. 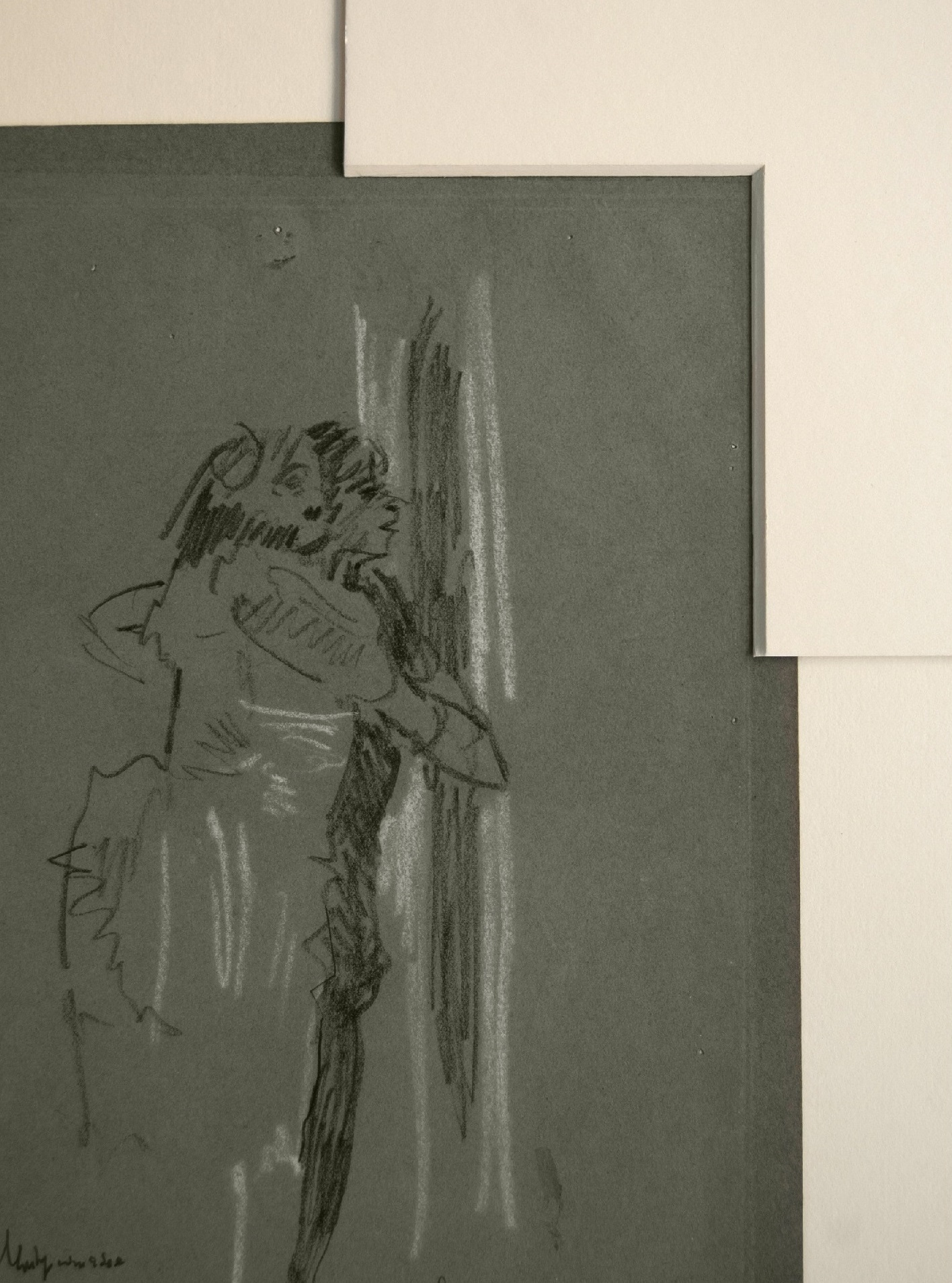 A computer generated overlay gives an impression of how this drawing would have originally looked.

With carefully calibrated light levels, directional beams and consideration to the colour balance (within the range of whites) the impact of intelligent lighting can be little short of ‘transformative’. As such, many of the more informed galleries are now making good use of specialist lighting designers.

An example of exhibition lighting here at the Fitzwilliam Museum:
Degas: A Passion for perfection (2017). 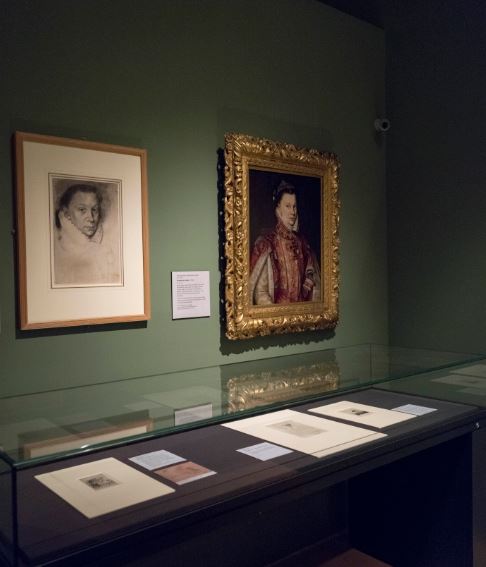 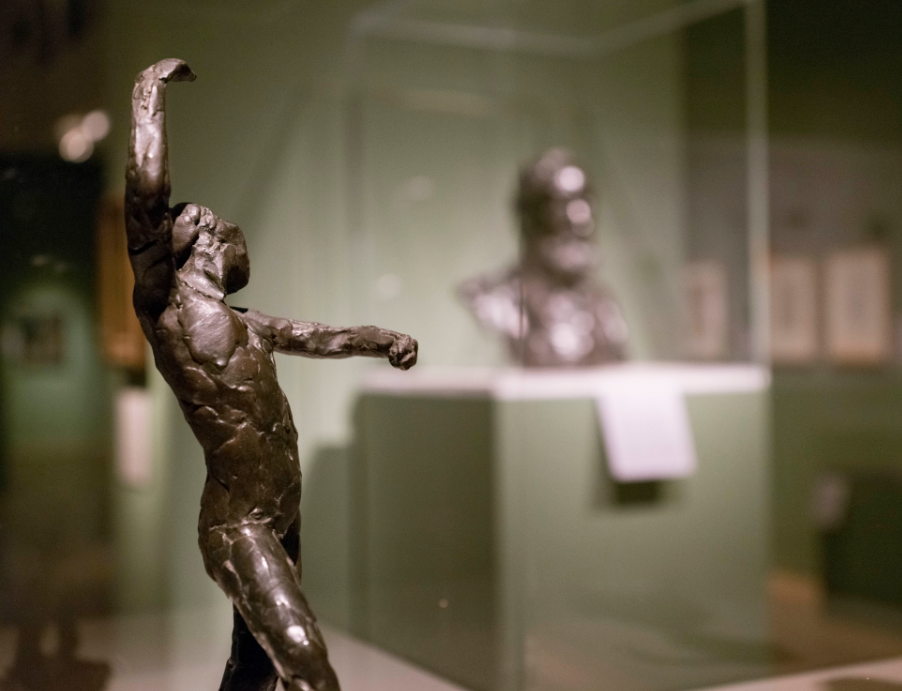 In the above two examples both the needs of the museum objects and the overall gallery lighting has been planned.

As part of a recent refurbishment project in one of the galleries here at the Fitzwilliam Museum, various lighting modifications were considered. The museum adapted – it embraced change and now this particular gallery is predominantly LED lit. 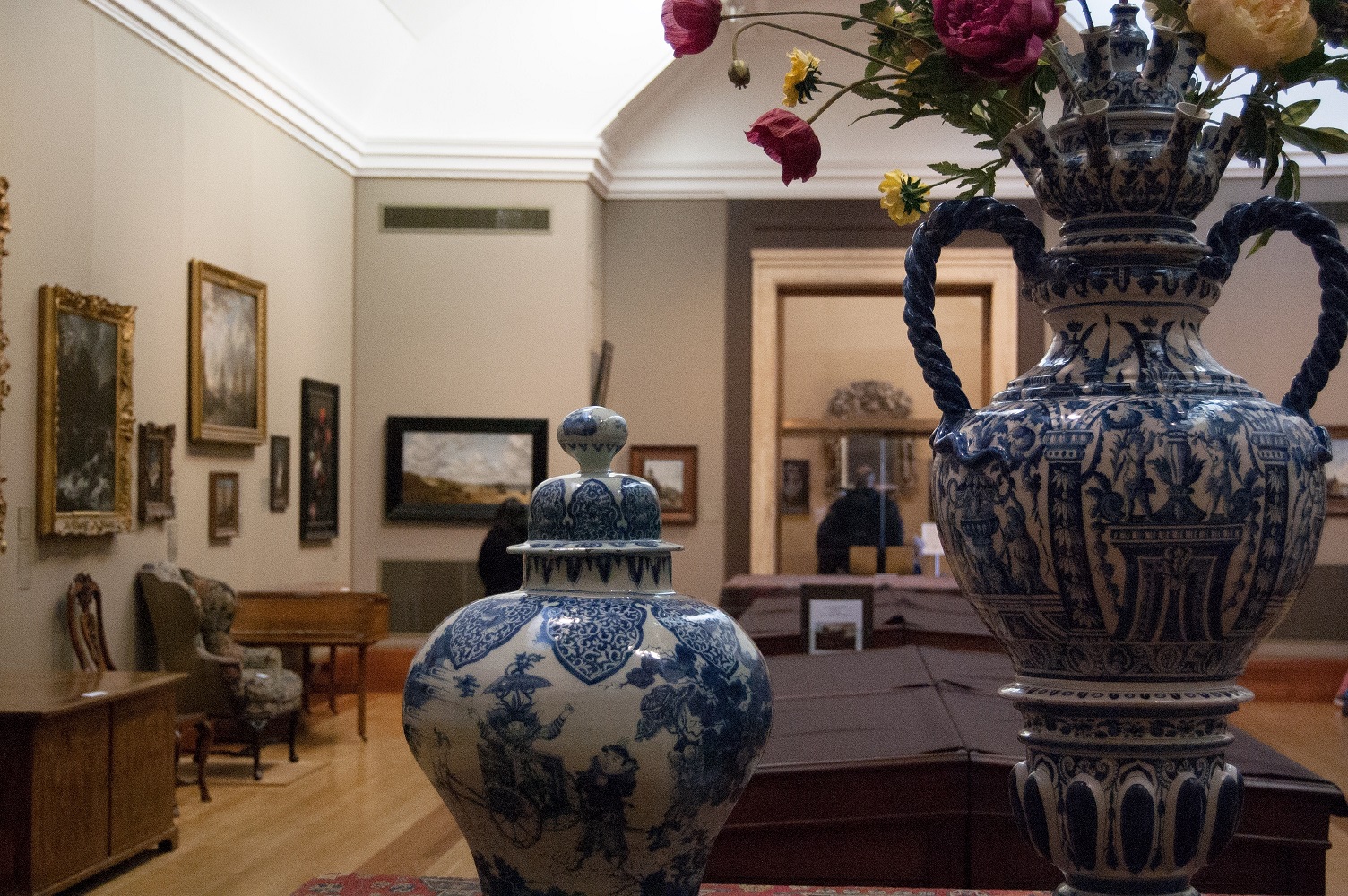 The Dutch Gallery with a c1690-1700 Flower Vase (foreground) hosting, in this case, some convincing silk flowers. 7

Displaying a mixture of museum items within the same gallery space can present certain challenges since each item type will have a different tolerance.

As such, the most sensitive object will tend to dictate the parameters. In this particular gallery the light levels falling on the displays range between 80 – 130 Lux (UV excluded) and are fully compliant with current standards.

The Dutch Gallery (above) is a wonderful example of just how beautiful a space can become with careful consideration and resourcefulness. LED’s are now very much part of the conversation and with regard to a transition, it is not a question of if but when. For my money – the sooner the better.

Seeing things in a new light – how LEDs are now very much earning their keep. Part 2 will follow in the coming months. Various pieces of studio equipment making use of LEDs will be further investigated and discussed.

Lighting for the built environment LG8: Lighting for museums and art galleries (The Society of Light and Lighting) ISBN 978-1-906846-7

Lighting Industry Liaison Group, A guide to the specification of LED lighting products, 2012

Thanks go to my many kind colleagues, including the photographic team here at the Fitzwilliam Museum, Helena Rodwell in Collections Care and to Richard Carpenter, our PDP Technician, for quite literally giving me a hand (his right hand in ‘taking a light reading’). Lastly, to Gwendoline Lemée, for her invaluable guidance and ever cheerful encouragement.