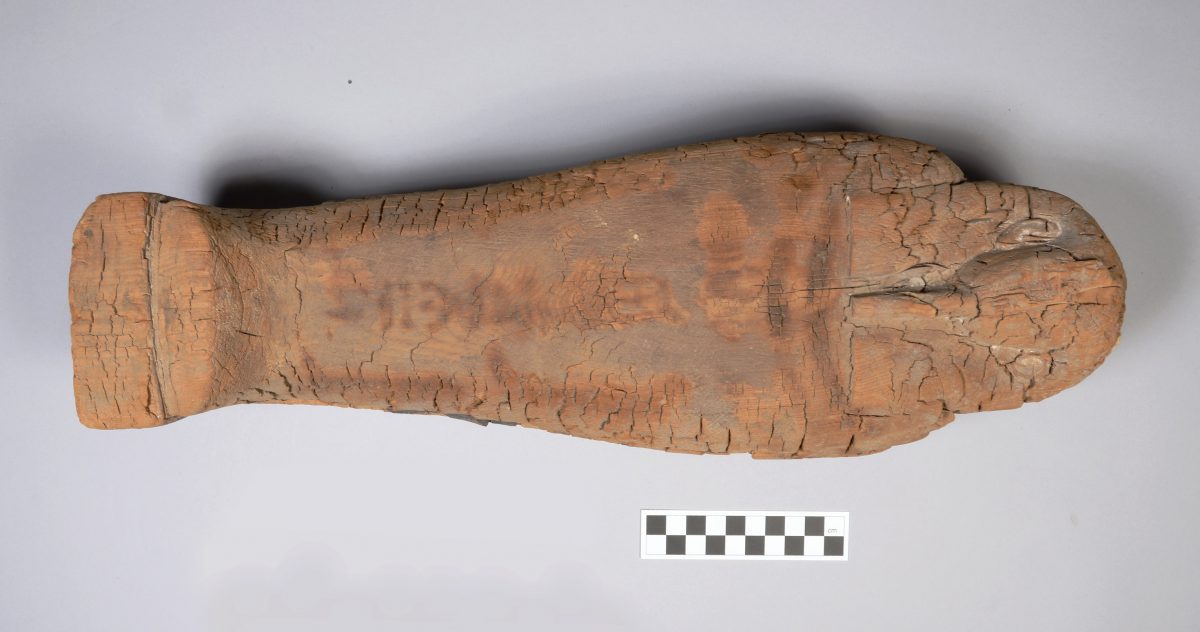 In 2016 the Fitz made the headlines with a remarkable discovery: a miniature Egyptian coffin (E.43.1907) that had been thought to hold mummified organs was found to contain an embalmed human foetus, probably the youngest ever known to be buried in Ancient Egypt.

The coffin had been X-rayed in preparation for the Death on the Nile exhibition, but when the results appeared inconclusive it was decided to CT-scan 1 its contents. This revealed a mummified foetus only 18 weeks into gestation, its arms ritually folded over its chest. It was wrapped in bandages, over which molten back resin had been poured before the coffin was closed.

The coffin that holds the bundle is of interest in itself. Excavated in Giza by the British School of Archaeology in 1907, it came to the Museum in the same year. Though the wood is poorly preserved and the painted surface entirely lost, surviving details of the face and ears show that it was skilfully carved. Measuring only 43cm in length, it is a fine example of an anthropoid coffin of the Late Period (664-525 BC), built on a tiny scale.

I recently re-examined the object with the aim of completing its technical study and assessing the condition of the fragile surface.

X-ray examination confirmed that box and lid are each carved out of a single piece of cedar wood2, joined by four pegged tenons on each side (Figs. 3 and 4). The deterioration of the wood is so severe that deep crevices are visible in X-rays of the box (Fig. 4).

A powdery white material can be seen on the ears, face, chest and feet (Fig. 5), particularly in recessed areas. This shows that the surface would have been covered in a white preparation layer (typically calcite mixed with animal glue), applied over the wood to create a smooth surface for painting. Traces of black resin are also visible, which may be unintentional splashes from when the burial bundle was coated.

Although to the naked eye the surface appears to be bare wood, microscopic examination reveals occasional loose pigment particles. The main colour visible is blue, seen on the wig and the collar. This is likely to be Egyptian blue3, a glassy, copper-based frit4 commonly used in the ancient world, and one of the earliest synthetic pigments. Red, yellow, and green pigment particles are also visible under the microscope, but it is hard to be sure that these are original.

Close examination also reveals signs left by craftsmen at the time of manufacture: a fingerprint in black (Fig. 6), probably left at the time the coffin was closed after the molten resin was applied within; and chisel marks on the wooden surface around the head (Fig. 7), which might have served to roughen the surface before the preparation layer was applied.

The surface was investigated further with an imaging technique known as Visible Light Induced Luminescence5 photography (VIL), used to detect the pigment Egyptian blue, and ultraviolet6 light (UV), which helps reveal the presence of varnishes and resins, but no further traces of the original decoration could be seen.

The fibrous structure of the wood is severely weakened by what appears to be brown-rot, a type of fungal degradation, also responsible for the pronounced fracturing of the surface (known as ‘cubing’). Entire sections of the surface are lost, particularly on the sides, but the head is better preserved. The surface layer easily crushes and powders on touch, a symptom of degradation of the wood structure at a cellular level.

The conservation treatment aimed to reinforce particularly degraded areas of the surface to avoid further losses. After cleaning with a soft brush, smaller wood fragments and highly deteriorated, fibrous areas were consolidated with a cellulose-based adhesive7, selected after testing due to its compatibility with wood and the fact that it did not change the appearance of the surface. Larger fragments were secured in place by inserting tabs of a long-fibre paper tissue soaked with a strong cellulose starch paste8. The powdery plaster and pigment residues had to be consolidated without touching the surface, as any contact with a brush would have picked up the loose particles. This was achieved by applying a consolidant9 in a mist using a nebulizer. For this treatment I chose Funori, a polysaccharide derived from dried red algae that has been used in Japan as an adhesive for over 300 years and is known for its excellent ageing properties and suitability for matte surfaces.

Though the coffin remains one of the most fragile objects in the Antiquities collection, the surface is now significantly stronger and less prone to losses, allowing for the coffin to be moved safely when needed for further examination and display.

The mummified foetus was discovered by Helen Strudwick, Associate Curator (Egyptian Antiquities), and Julie Dawson, Head of Conservation, both from the Fitzwilliam Museum, in collaboration with Dr Tom Turmezei, Honorary Consultant Radiologist at Addenbrooke’s Hospital in Cambridge, and Dr Owen Arthurs, Academic Consultant Paediatric Radiologist at Great Ormond Street Hospital, London. Technical investigation of the coffin was carried out by the author and by Jennifer Marchant, Conservator of Antiquities and Assistant Keeper at the Fitzwilliam Museum. The wood species was identified by Caroline Cartwright, Senior Scientist at the British Museum, in 2006.

Jillian, H. and Z. Wyszomirska-Noga, ‘Funori: The use of a traditional Japanese adhesive in the preservation and conservation treatment of Western objects’, in Adapt & Evolve 2015: East Asian Materials and Techniques in Western Conservation. Proceedings from the International Conference of the Icon Book & Paper Group, London 8-10 April 2015. London: The Institute of Conservation, 2017. 69–79.

View all posts by Flavia Ravaioli